A Museum About Soccer, and About Germany

Zeitungsartikel in "The New York Times" über das Deutsche Fußballmuseum: "It shows you the connection between society and football"

Just 16 months old, the national museum to the national sport of football has charged into visitors’ consciousness like one of Germany’s soccer greats dodging and weaving to score a crucial goal.

To its millions of fans the world over, football, or soccer, is more than mere sport. It is — choose your favorite description — a religion, an obsession, a pastime that inspires higher purpose in a humdrum life, fuses the individual to the collective, and infuses that collective with national feeling.

In Germany, all of that is true, and then some.

Since soccer first made its way here from England, where the Football Association was established in 1863, it has reflected both the pride and the darkest pitfalls of German history. It is this chronicle that distinguishes the Dortmund museum from similar soccer shrines across Europe and around the world.

Fussball, as soccer is known here, looms large in the national psyche. In a country of 81 million people, the national soccer association is just shy of seven million members. There are 25,075 local soccer clubs. Freekickerz, a soccer website, is the biggest YouTube site in Germany, with more than five million subscribers. Men, in particular, schedule important life events like weddings around (even more) important matches.

“You know the famous saying,” said Uli Hesse, author of a book on German soccer. “There are three most popular sports in Germany: football, football and football.”

#bild#Accordingly, the German Football Museum in Dortmund had more than 200,000 visitors in its first year, and the appeal is growing, according to the city’s proud mayor, Ullrich Sierau, an ardent fan of a multimedia museum he hails as “almost a visualization of Germany.”

“It shows you the connection between society and football,” he said.

Any soccer fan — in fact, almost any German — will tell you that the moment the country first felt able to return with dignity to the international arena after the evil of Nazism came with what is known here as “the miracle of Bern,” the 3-2 victory in Switzerland over favored Hungary to win the World Cup in 1954.

Museum visitors are thus greeted with life-size portraits of the 1954 West German team and biographies of the players, above all the captain, Fritz Walter, and the coach, Sepp Herberger. A 1950s radio set broadcasts the commentary to the game — one player is hailed as “a god of football” — and a vintage TV shows black-and-white footage of the match.

A sign reminds visitors that most Germans then could not afford a TV, and thus are seen in black-and-white photos clustered around radios or the open windows of bars with televisions. Also on display is a quotation from a distinguished historian, Joachim Fest, placing the 1954 victory squarely in the Wirtschaftswunder, or economic miracle, that was West Germany after Nazism.

“There are three founding fathers of the Federal Republic,” Fest said, referring to the first two postwar chancellors and the soccer triumph. “Politically, it’s Adenauer. Economically, it is Erhard. And mentally, it is Fritz Walter.”

Thomas and Christiane Kurz, 63 and 53, are too young to remember the match itself. But on a recent Sunday they sat rapt, hearing the ecstatic commentator proclaim: “Aus, aus, aus, aus. Das Spiel ist aus. Deutschland ist Weltmeister!” (“Over, over, over, over. The game is over. Germany is world champion!”)

As the minutely detailed exhibit then relates, West Germany went on to win the Cup in 1974 and 1990, and Germany won the most recent championship, in Brazil in 2014.

This prowess results at least in part from the strong teams that developed in the late 19th and early 20th centuries here in the Rhine-Ruhr area, Germany’s old industrial heartland. Borussia Dortmund, for example, was the team of the city’s steelworkers.

The foundries are quiet now, but the local soccer stadium is the biggest in Germany. A sea of distinctive yellow and black, the team colors, forms at every sellout match, especially when fans sing local soccer anthems, another feature imported from England, but arguably stronger now here.

Mr. Hesse, an editor at the soccer magazine 11Freunde and author of “Tor! The Story of German Football,” said the exhibit focused on the national team at the expense of tradition-laden clubs from the gritty Ruhr down to Bayern Munich.

But that dominance mirrors the way soccer is drowning out other sports. After the 1980s surge of tennis through Boris Becker and Steffi Graf, “football is really pushing everything else aside,” Mr. Hesse said, with even fourth-division games broadcast live on television while a recent world championship in handball, popular across Continental Europe, was ignored.

The Dortmund museum has fun features, like one that lets you become your own game commentator from actual broadcast booths. Visitors can vote on whether the notorious third goal for England — when it clinched its lone World Cup, against Germany in 1966 — was, or was not, over the line. (The vote on a recent visit, perhaps no surprise, ran 57 percent against England.)

But the museum does not shy from Germany’s past. The national team of 1941 is seen giving the Nazi salute before a game in Sweden. An infamous 1944 propaganda film runs, showing Jewish inmates at the Nazis’ Theresienstadt camp near Prague playing soccer and ostensibly enjoying a relaxed life. (In reality, most were about to be shipped to Auschwitz.)

The German Football Association’s ban on women’s soccer from 1955 to 1970 is also related in detail — as are the considerable achievements of Germany’s female soccer team since. That story, noted the museum director, Manuel Neukirchner, provides two of the biggest surprises for young visitors.

#bild#“We ask: What do you think the German ‘football Frauen’ got for winning their first European title in 1989?” Mr. Neukirchner wrote in an email. “The kids say money. The truth is — a coffee service.

“Next we say women’s football was banned not in the Middle Ages but in the middle of the 20th century — where was that? The answers are: Afghanistan, Pakistan, Saudi Arabia. And the truth is: West Germany.

“Those are the Aha! moments where the discussion goes far beyond football.”

Young visitors who might not go to a history museum absorb the 20th century as it unfurled through soccer. The exhibit, for example, recalls the country’s Cold War division and rivalry that climaxed when West Germany hosted and won the World Cup in 1974. But not before it suffered an unexpected 1-0 defeat against East Germany in an early round.

(The East German goal scorer, Jürgen Sparwasser, was feted by the Communist regime until he defected to the West in 1988, a harbinger of the fall of the Berlin Wall a year later.)

Lutz Engelke, the Berlin-based designer of the museum, said weaving in national history was a prime aim. “Soccer and society are actually very, very close,” he said. “Football is not just sport, but cultural, social and political history.” 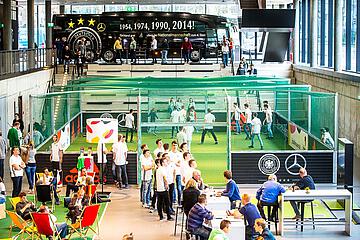 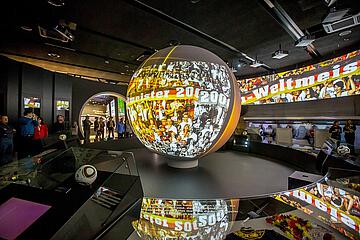